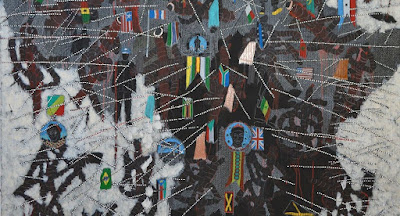 Contemporary Africa Through the Eyes of its Artists

“In the week of the Brazilian National Black Consciousness Day (celebrated on November 20th), Sesc will launch the exhibition “AquiAfrica” [“HereAfrica”] at its Belenzinho branch, São Paulo. An ART for the World project curated by Adelina von Fürstenberg – a curator awarded the Golden Lion in May, 2015, at the 56th Venice Biennale for her work with the National Pavilion of the Republic of Armenia –, this exhibition will show Africa to the Brazilian public through the eyes of 13 contemporary artists from different generations and 11 Sub-Saharan countries – also known as Black Africa – from November 19th, 2015 to February 28th, 2016.

Paintings, photographs, drawings, sculptures, videos, and an installation especially selected for the exhibition will address key matters for the African people, such as immigration problems, xenophobia, rampant consumerism, cultural traditions, and systems of power ruling the continent.

7 artists of the  Volatile Viewing of Videos, Benin by Kulturforum Sud-Nord, Cotonou-Hamburg

Adelina von Fürstenberg is a renowned international curator who has been credited with broadening contemporary art. She was one of the first curators to show active interest in non-European artists and established a signature multicultural approach in art. With her unique vision on contemporary exhibitions, she has placed art in spaces such as monasteries, medersas, large public buildings, squares, islands, parks, etc. Her works strives to provide a larger context for visual art by making it a more vigorous part of our lives, creating a more vivid dialogue between art forms, and relating it to global social issues.

Adelina is the Founder and the first Director of the Centre d’Art Contemporain of Geneva. Her work as Director of Le Magasin at the Centre National d’Art Contemporain of Grenoble and of its School of Curators was internationally recognized with an award at the  Biennale of Venice (1993). She has organized numerous large-scale exhibitions around the world including Dialogues of Peace to mark the United Nations’s 50th anniversary (1995)  and appointed by UNHCR and the European Commission to produce Stories on Human Rights, 22 short fiction films for the 60th anniversary of the Universal Declaration of Human Rights (2008). She is the founder and director of AFTW and currently the Chief Curator of the 4th Biennale of Thessaloniki (2013)

For more information on the project see: http://www.hereafrica.net