From 2000 on, ART for The World has produced a serie of travelling exhibitions of more then 60 artworks on the theme of Playgrounds&Toys designed by artists and architects from all over the world. In every place in which the exhibition is held, a local jury choose his favorite playground. In January 2001, during the venue at the Andersen Museum in Rome, Chen Zhen's project Danser la Musique was chosen from a jury composed by UN, UNHCR and UNESCO’s representatives, Giordano Boetti, the son of the artist Alighiero Boetti and the Children Psycanalist Prof. Giovanni Bollea.

Danser la Musique aims to combine both the form and the function of dance and music. The work expresses the artist’s concern for disadvantaged children suffering from social injustices and for those living in the most unacceptable conditions in various regions of the world. The hope is that this playground will help to turn sorrow into happiness, making children still feel the joy and strength of life while facing poverty and war. 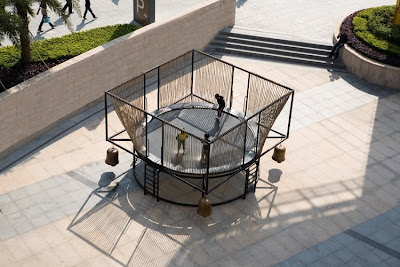 Artist’s biography
Chen Zhen was born in 1955 in Shanghai where he studied and then taught at the Shanghai Fine Arts & Crafts School and at the Shanghai Theatre Academy. In 1986, he moved to France where he studied at the Institut des Hautes Etudes en Arts Plastiques of Paris. He then worked as Professor at the Institut and Ecole Nationale Supérieure des Beaux-arts in Paris and at the Ecole Nationale Superieure D'Art in Nancy. Between 1990 and 2000, Chen was awarded six art scholarships from French and American institutions and participated to nearly one hundred exhibitions, where he presented internationally acclaimed installations. He was listed as one of the most influential installation artist of the Nineties. His unrestricted style walks through the Chinese and western cultures, seeking a balance between unifying the senses of the audience and presenting the artist’s unique language and philosophy. Chen’s work brings to the extreme the idea of diversity that pervaded the art world during the last years of his life.

No comments:
Libellés : Playgrounds and Toys 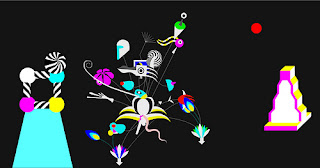