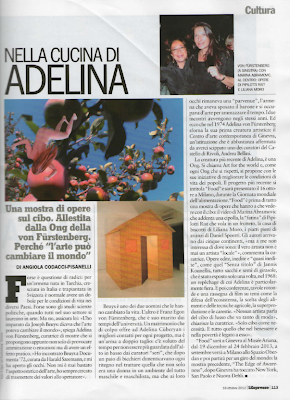 Press conference of "FOOD" in Milan on October 16

will be presented to the press on Tuesday, October 16 at 12 am at Palazzo Isimbardi, Via Vivaio 1 in Milan.

Curated and conceived by Adelina von Fürstenberg, the project is a reflection on the preservation of our Mother Earth, the choices of nutrition, the consequences of the climate changes, the poisoning of the agricultural products, the gap of the feeding distribution, the famine and other subjects connected.

The conference will see the interventions by: Filippo Ciantia, Country Relations Manager International Affairs Department, Expo 2015; Sami Kanaan, Conseiller Administratif and Chef du Département Culture et Sport de la Ville de Genève; Daniela Rubino, Vice-President of Slow Food Lombardia; Marina Calloni, Department of Sociology and Social Research of the Università degli Studi, Milano-Bicocca; Adelina von Fürstenberg, concept and curatorship of FOOD and President of ART for The World, and the representatives of Provincia di Milano.
FOOD aims to be, through the works of the artists and filmmakers, a platform for culture and creativity for a better comprehension of reality and practice of values concerning alimentation, with a view to Expo Milan 2015, whose main topic is Feeding the Planet, Energy for Life.

With exhibitions, performances, films, debates, conferences, round tables and workshops around the topic of nutrition, the audience will be involved in questions connected to the territory, right to the food, valorization of the alimentary traditions for a sustainable development and to encourage new attitudes to the new generations, with the contributo also of economists, anthropologists, sociologists and alimentary research centers.

At SESC Pinheiros, Sao Paulo, Brazil, the 3rd and last venue of The Mediterranean Approach.

Opening Saturday, October 6 at 11am with the participation of the artists Ghada Amer, Adrian Paci, David Casini, Peter Wüthrich and the filmmaker Hüseyin Karabey. 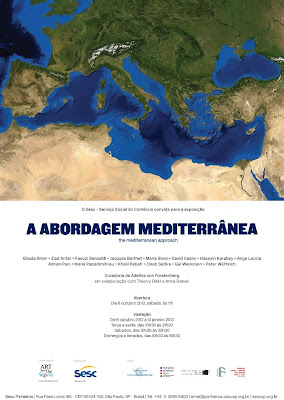