On February 26 the Italian newspaper Il corriere della sera published on its Sunday supplement La Lettura a large review on the exhibition The Mediterranean Approach in Marseille. The article is focused in particular on the two video installations Gardiennes d'images (2010) by Zineb Sedira - featuring a wide acknowledgement of the photographer Mohamed Kouaci's work on Algerian revolution through the words of his widow, Safia Kouaci - and The 3rd Annual Wall Zone Auction (2004) by Khalil Rabah documenting the auction of several items of natural material from the wall zone surroundings, organized in 2004 by the Palestinian Museum of Natural History. 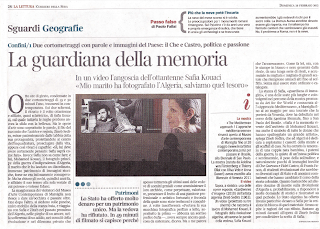 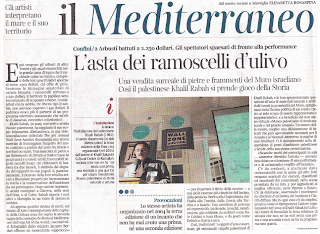 Some press clips on The Mediterranean Approach

Some of the first reviews published on the French newspapers on the exhibition The Mediteranean Approach  and a video available at the following link on the official website of the city of Marseille:
http://www.marseille.fr
No comments:
Libellés : Exhibitions

The Mediterranean Approach in Marseille: some snapshots

We had great time in Marseille for the opening of The Mediterranean Approach, along with the artists,
the director of the museum and co-curator of the exhibition Thierry Ollat and all the staff of the [mac] Musée d'Art Contemporain.
Here are some installations views at the museum and snapshots taken during the press tour and the opening on February 17.
The [mac] will host the exhibition until May 20.

The Mediterranean Approach opening in Marseille

The Mediterranean Approach will be opened at the [mac] Musée d'Art Contemporain in Marseille on February 16. 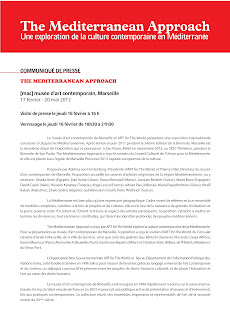 The omnibus films THEN AND NOW Beyond Borders and Differences (7 short movies, produced in 2010-2011) and Stories on Human Rights (22 short movies, produced in 2008) will be screened in Istanbul at the Teen International Shorts Festival on February 7 and 8. TISFEST - established in Istanbul 8 years ago - aims to bring together the young filmmakers and masters, to enable the youth to have different interaction opportunities and increase awareness of other cultures from different segments of society.
For more info and program: www.tisfest.org 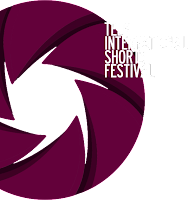 No comments:
Libellés : Stories on Human Rights, THEN AND NOW Beyond Borders and Differences

Distante un padre (Far Away a Father) by the Italian artists and videomakers Masbedo is a segment of the long feature THEN AND NOW Beyond Borders and Differences, produced by ART for The World in 2010 under the auspices of the Alliance of Civilizations and the Council of Europe.

Inspired by Art. 18 of the Universal Declaration of Human Rights "Everyone has the right to freedom of thought, conscience and religion", the short movie is focused on the themes of Life, Death and After.
Starting with a voice over saying “If there's no happiness, at least there will be light”, the short turns an intimate tragedy as the death of a child into a universal drama, focusing on the delicate relationship between living and dying and the search for permeable borders and for the meaning in the ambiguous space between life and death.

Damir, a professional diver, loses his daughter and the tragedy devastates his relationship with his wife Greta. While Damir is preparing for a dive with a colleague, descending into the depths in a submersible compression chamber, Greta is in a bathtub and turns on the CB (two-way radio) that broadcasts the communications of the professional diving company for which Damir works: it is a way for her to know what he is doing, a voice that testifies to an unbroken bond. During the dive, Damir is risking his life due to an accident while at home Greta hears the voices of the surface crew announcing Damir’s dramatic predicament. Feeling that he is close to death, Damir starts thinking to his daughter “I need my daughter. She's on the bottom, I have to find her” and declares his love for her and for Greta, but he is alone and only his diving companions can hear him. Greta is devastated and slowly slides down into the bathwater, unconsciously seeking symbiosis with him and her daughter.

Masbedo were born in Milan in 1999 from the meeting between Nicolò Massazza and Jacopo Bedogni. Their video production's explicit aim is to "use images to express a detached narrative vision, independent from texts or scripts".