The Mediterranean Approach opening in Marseille on February 16, 2012

After Palazzo Zenobio, during the Venice Biennale, and before traveling to Brazil at SESC Pinheiros in Sao Paulo next fall, The Mediterranean Approach will be opened at [mac] Musée  d'Art Contemporain in Marseille on February 16, 2012. 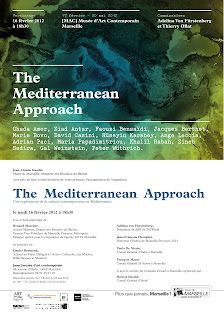 La longue marche du caméléon by the renowned director from Burkina Faso Idrissa Ouédraogo is a segment of the long feature THEN AND NOW Beyond Borders and Differences, produced by ART for The World in 2010 under the auspices of the Alliance of Civilizations and the Council of Europe.

Inspired by the art. 18 of the Universal Declaration of Human Rights, "Everyone has the right to freedom of thought, conscience and religion", the short movie is focused on the theme of syncretism of beliefs.

Idrissa Ouedraogo won the Silver Bear at the Berlin Film Festival (1993) and the Grand Jury Prize at the Cannes Film Festival (1990), besides many other recognitions in worldwide festivals. He also participated with the short movie La Mangue in the film project Stories on Human Rights produced by ART for The World in 2008.