From ruins of Greek debt rises art, eager and blunt is an interesting article by Rachele Donadio on art in Greece, where the debt crisis has created an intriguing bright spot: "a burst of  artistic activity in  response to the national identity crisis it has provoked".
You can read the article published in the New York Times, World News Europe on October 15-16, 2011 at the following link:  http://www.nytimes.com/World News
No comments:

"What About Me?" at the Théatre de l'Odéon, Paris

The short movie What About Me? by the renowned Israeli filmmaker and writer Etgar Keret will be screened at the presence of the author at the Théatre de l'Odéon in Paris on October 17. The screening has been organized on the occasion of the presentation of Keret's new book "Au pays des mensonges".
What About Me? was shot in 2008 within our collective film project Stories on Human Rights and co-directed with his wife Shira Geffen.

Etgar Keret is one of the most internationally acclaimed Israeli writer. He earned international recognition in 2007 with his film Jellifish, co-directed with Shira Geffen, and winning the Caméra d'or at the Cannes Film Festival.

The short movie Black Breakfast (2010) by Jia Zhang-ke will be screened at the Festival International du Film de la Roche-sur-Yon (France) on Octobre 13-18, 2011.
The short movie will be part of the extensive retrospective dedicate to the Chinese director.

Jia Zhang-ke is considered a leading figure of the "Sixth Generation" of Chinese directors. He has received critical praise and has been recognized internationally, notably winning the Venice Film Festival's Golden Lion for Still Life in 2006. His films treat themes of alienated youth, contemporary Chinese history and globalization, and are characterized by the usage of a long-take, colorful digital video and a minimalist style.

Black Breakfast was shot in 2008 in China, as part of the collective film project Stories on Human Rights, inspired by the articles of the Universal Declaration of Human Rights and focusing in particular on the theme of environment.

"A cosa servono le mostre?": some snapshots of the symposium

Here are few photos of the participants at the symposyum A cosa servono le mostre? (What are exhibitions for?), at Fabbrica del Vapore/Careof, in Milan on October 7-8, 2011.

What are exhibitions for? Which is the role of the curator, the director of an art center or museum nowadays? Is there a space for art criticism? What are the edges of the curatorial work and the objectives  for an artist today?

ART for The World in collaboration with Careof presents A cosa servono le mostre? (What are exhibitons for?), two days symposium and discussions curated by Adelina von Fürstenberg, Roberto Pinto, Chiara Agnello and Mario Gorni, with the participation of artists, museum directors, curators and art critics working in Milan and in the region.

The program is available on www.careof.org 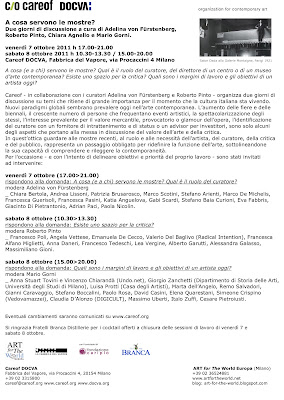