The video shot at the port of Palermo in 2011 is the continued recovery of a fish struggling between life and death. His body rotates clockwise drawing a circular shape, inscribed in a rectangle frame. The surface broken up by the tail of the fish (by its soul) that, in its perpetual motion, seems anchored to a central point, suspended between the surface (of the sea and of the image) and the water depth (that it is hidden, submerged). Birds by Hossein Alizadeh in collaboration with Djivan Gasparyan, gives a deeper lecture to the images and offers a multicultural atmosphere of the Sicilian and Mediterranean waters and of the port of Palermo. 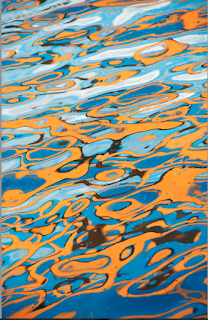 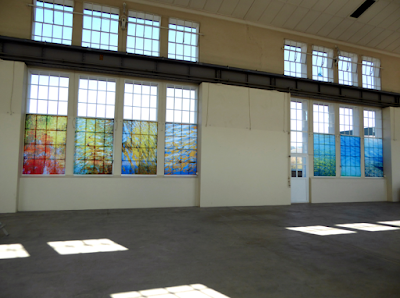 Water is the central element in our life; without water there is no life. Water has strength, energy, beauty, it is transparent, it creates space. It streams, flows, drips, mirrors. The installation with 15 big panels of water pictures will emphasize the necessity, but also the beauty of water.

"This video focuses on the reflections of the water that runs in a small fountain creating pops, deliberately overexposed . These whirling movements seemed similar to the wriggle of the flames of a fire extingushed by myself, with the blue color. The creation is generated in the movement and this dance is the dance of water, fire, resistance and defeat, the swirl of life. Through the blue appears the artifice. What a strange syllogism comes to mind when you consider the roots and the meaning of this word. Two fish, apprentices dancers, in a small basin, are too clumsy to be able to follow the notes of Strauss son. However, their closeness is moving. Metaphor of infinite existence, as a waltz continues its tireless ballad, the fishes play with the notes in blue, as the first dance of an embraced couple. At the end, finally, one can hear the lapping of the water, their oxygen, endless metaphor of hope (maybe they are now swimming freely in the Beautiful Blue Danube). This, to me, is the water."

The formula bruta (or emperical formula) of a chemical species is a particular chemical formula that provides information on the number and on the chemical nature of the atoms that make up the chemical species in question and is so named because it does not indicate the way in which the atoms are linked between them.
On 7 April 1795, the gram was defined in France to be equal to “the absolute weight of a volume of pure water equal to a cube of one hundredth of a meter, and at the temperature of melting ice. For practical purposes though, a metallic reference standard was required, one thousand times more massive, the kilogram. Work was therefore commissioned to determine precisely the mass of one liter of water. In spite of the fact that the decreed definition of the gram specified water at zero Celsius degree, the scientists chose to

redefine the standard and to perform their measurements at the temperature of highest water density, which was measured at the time as four Celsius degree (39 °F). The definition of water was born in the first analysis by the need to have a reference and a link with a element which stands at a semantic area and different chemical. A metallic element. The empirical formula is therefore a concept translated describing the slip of coincidences in antropic and not antropic traces. The project aims to collect a massive series of not declared connections where the water not explicitly turns out to be a brute engagement with the bonds of the social infrastructures and overstructures creating and high- lighting similarities and criticisms.

ADELINA VON FÜRSTENBERG
Founder and Director of ART for The World. She is an independent curator and film producer, founder and former Director of the Centre d’Art Contemporain de Genève, and former Director of Magasin-CNAC, Grenoble, France. Curator of the National Pavilion of Armenia, Golden Lion for best national participation at the 56th Venice Biennale 2015, and winner of the Swiss Grand Award for Art/Prix Meret Oppenheim 2016

Adelina von Fürstenberg founded the Centre d’Art Contemporain de Genève in 1974 as a student of political science in a time characterized by antiauthoritarian revolt. “In those days, studying political science was a gesture of freedom and an act of participation in society’s transformation,” she notes. A trip to curator Harald Szeemann’s the seminal 1972 Documenta 5 prompted a move into art. In Kassel, von Fürstenberg met James Lee Byars, Edward and Nancy Reddin Kienholz, and Joseph Beuys, among others. “I realized then how important the defense of artistic creation was,” she recalls.
Beuys was a pivotal influence: “I immediately subscribed to his belief in the creative capacity of every individual to shape society through participation in cultural, political, and economic life, and in the production of art and knowledge through viewer and artist.” She founded the Centre d’Art Contemporain on her university campus two years later, and has never since stopped exploring and challenging the boundaries of art. In this interview, we gain insight into the life of this most radical of curators.

Stephanie Bailey: You showed some of the late twentieth century’s most significant artists at Centre d’Art Contemporain Genève, from John Cage to Andy Warhol, Laurie Anderson to Joan Jonas. How did this experience influence your work in the beginning?

Adelina von Fürstenberg: I came to the art world during the sweeping period of the 1970s, and have since spent most of my life with artists. Many of them became my mentors. Early on, Christian Boltanski introduced me to the work of Daniel Buren, who immediately introduced me to the New York avant-garde. I then worked with Lawrence Weiner and Dan Graham, through whom I met Bob Wilson, Philip Glass, Lucinda Childs, and so on. After these encounters, I was able to invite everyone to show and perform in Geneva—all this in the first few years of my curatorial work! Of course, the art world in those days was a way of thinking and doing. It was not about doing business.
Read more »
2 comments: Liens vers cet article
Libellés : Interviews, Publications 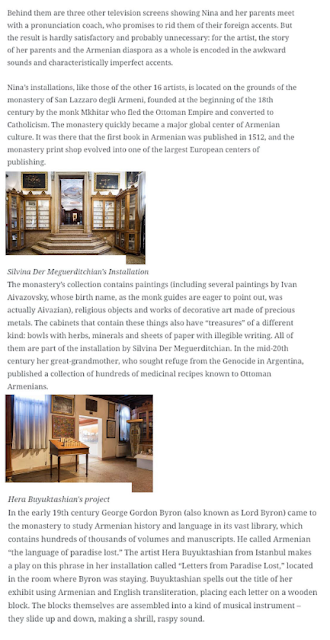 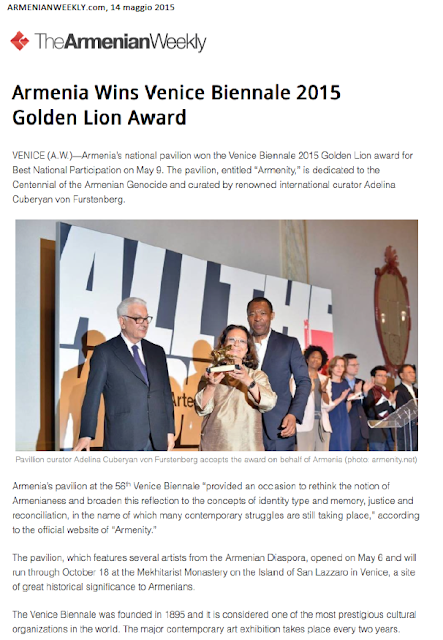 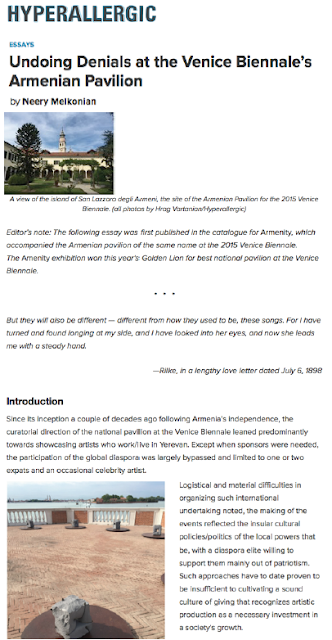 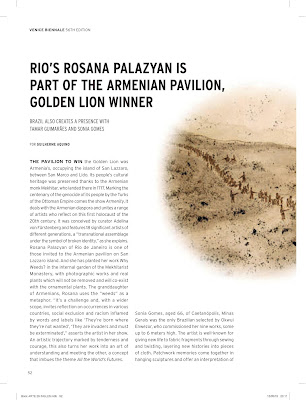 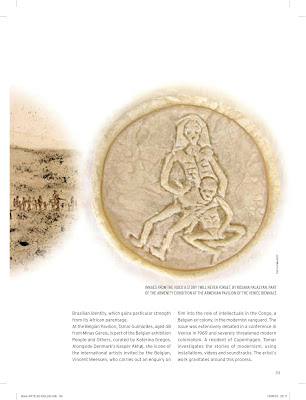 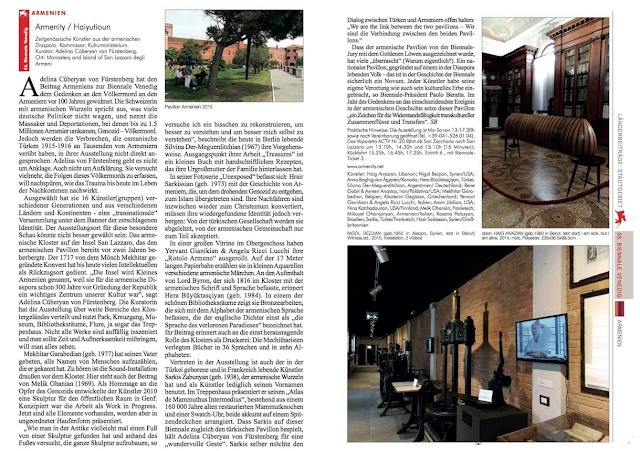 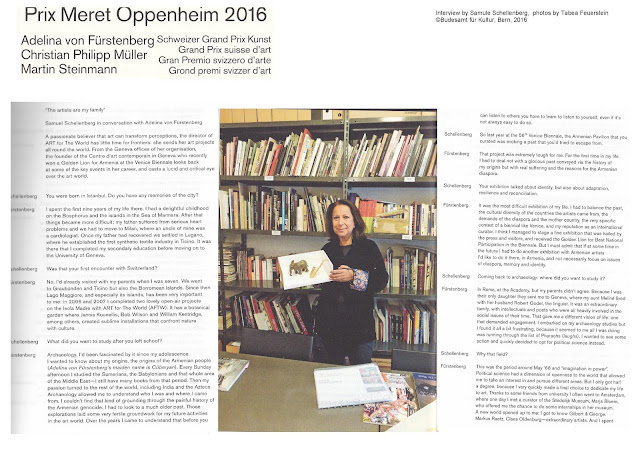 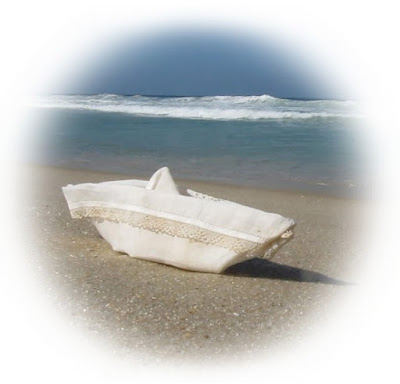 Please click here to watch the video on vimeo

"… Uma história que eu nunca esqueci…" / "… A story I never forgot…", is a video installation in which the video, produced in an “artisanal” manner, pretend to reorder and organize the fragmented memory of the Armenian genocide based on the stories and narrative heard since childhood. A handkerchief embroidered by my grandmother when a refugee in Thessaloniki runs through the whole story. Transformed in each episode, the object covers the story of her origin remembrances in Konya, the life in Greece, until the arrival in Rio de Janeiro and her new life. (…)

In this second version presented here (a fragment of the video first version), the story acquires a new autonomy. Now, as the autobiographical narrative is not explicit, the handkerchief carries in it all the memory, crossing seas. And water is the strong presence, as a symbolic element of time and space, taking us on this journey. The beauty of the sea, that at the same time carries dreams, as the idea of displacement to a better and new world. On the other hand, makes think in the continued political events and all sad stories of the refugees around the world.

As I have observed by the reaction of the people, the work transcend the particular character, touching internally the memories kept of each spectator and their own stories."
Rosana Palazyan, 2013/ 2016 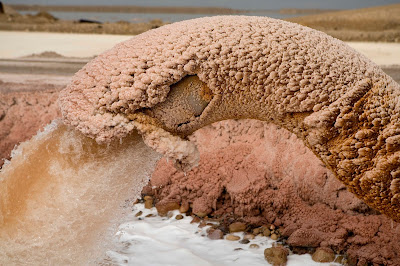 The Jordan River & the Dead Sea

In 1964 Israel started transferring an estimated 98 percent of the Jordan River out of its basin the Lake Tiberias into a large central pipeline called The National Water Carrier, basically drying out the Jordan River and seriously threatening the ecology and sustainability of the Dead Sea.