Republic of Armenia Pavilion at the Venice Biennale 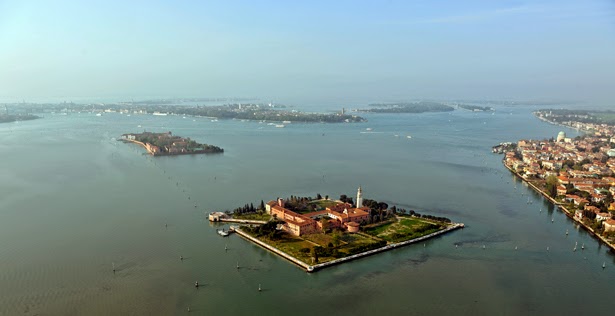 Courtesy of the Mekhitarist Monastery of the Island of San Lazzaro, Venice.

The National Pavilion of the Republic of Armenia

Contemporary artists from the Armenian Diaspora

Haig Aivazian, Lebanon; Nigol Bezjian, Syria/USA; Anna Boghiguian Egypt/Canada; Hera Büyüktaşçıyan, Turkey; Silvina Der-Meguerditchian, Argentina/Germany; Rene Gabri & Ayreen Anastas, Iran/Palestine/USA; Mekhitar Garabedian, Belgium; Aikaterini Gegisian, Greece; Yervant Gianikian & Angela Ricci Lucchi, Italy; Aram Jibilian, USA; Nina Katchadourian, USA/Finland;Melik Ohanian, France; Mikayel Ohanjanyan, Armenia/Italy; Rosana Palazyan, Brasil; Sarkis,Turkey/France; Hrair Sarkissian, Syria/UK
Curated by Adelina Cüberyan v. Fürstenberg*
Opening May 6, 2015, from 7 to 9pm Special shuttle service ACTV vaporetto from the Giardini to the Island of San Lazzaro. ACTV vaporetto Number 20 from San Marco Zaccaria to San Lazzaro
In this symbolic year 2015, on the occasion of the 100th commemoration of the Armenian Genocide, the Ministry of Culture of the Republic of Armenia has dedicated its pavilion to the artists of the Armenian diaspora. It will be located at the Mekhitarist Monastery on the island of San Lazzaro degli Armeni.
The curatorial concept of armenity** implies the notion
of displacement and territory, justice andreconciliation, ethos and resilience. Regardless of their place of birth, the selected artists carry within their identity the memory of their origins. Through their talent and willpower, these grandchildren of survivors of the Armenian Genocide—the first genocide of the 20th century—rebuilt a “transnational assembly” from the remnants of a shattered identity. Their ingrained concern for memory, justice andreconciliation skillfully transcends notions of territory, borders and geography. Whether they were born in Beirut, Lyon, Los Angeles, or Cairo and wherever they may reside, these global citizens constantly question and reinvent their armenity.
Armenity is being held in a setting of special significance for the Armenian diaspora. It was on theIsland of San Lazzaro, located between San Marco and the Lido and facing the Giardini of the Biennale, that in 1717 the Armenian monk Mekhitar established the Mekhitarist Order. It was here that in the early 19th century Lord Byron studied the Armenian language. Many important works of European literature and religious texts were first translated into Armenian on this scenic island. Over its 300-year history the Monastery of San Lazzaro with its gardens, former print shop, cloisters, museum and library, has helped to preserve Armenia’s unique cultural heritage, much of which might otherwise have been lost.
An accompanying catalogue published by Skira, Milan will contain colour reproductions and texts in English and Armenian. An introduction, forewords and curatorial texts will be followed by four pages dedicated to each of the 16 artists: one page of text by each artist and essays by international art critics and writers such as Ruben Arevshatyan, Cecile Bourne, Ginevra Bria, Adam Budak, David Kazanjian, Berthold Reiss, Gabi Scardi, Hrag Vartanian and three pages with images and drawings of the works. The third part of the catalogue will contain essays by New York-based art historian and independent curator Neery Melkonian and London-based art writer and Ibraaz editor Stephanie Bailey. The catalogue will end with the Armenian translations of the texts.
Press contact:
Lucia Crespi, Milan
T +39 02 89415532 / T +39 02 89401645 / T +39 338 8090545 /
lucia@luciacrespi.it / press@artfortheworld.net
The Lyon-based Bullukian Foundation is proud to be a partner of Armenity.
*Adelina Cüberyan von Fürstenberg is a renowned international curator. A pioneer in the field, she is known for broadening contemporary art to include a multicultural approach. Founder and first Director of the Centre d’Art Contemporain de Genève, she directed as well the MAGASIN–Centre National d’Art Contemporain in Grenoble. In 1996 she founded ART for The World, a unique NGO working with contemporary art, independent cinema and human rights.
**Armenity derives from the French word Arménité, a notion which expresses the particular characteristics of the grandchildren of Armenian Genocide survivors. These include a state of constant flux, a diversity of self-definition, and a modern and often subjective sense of being-in-the-world.