On Monday, April 26th, ART for The World presented two new exhibitions at Open Care, Milan: ARAL_Citytellers, a film by Francesco Jodice and A cena con Timeo, an installation by Letizia Cariello.
The opening was characterized by an open discussion between Francesco Jodice and Saverio Pesapane, architect and researcher. 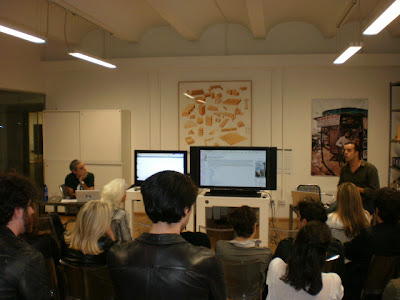 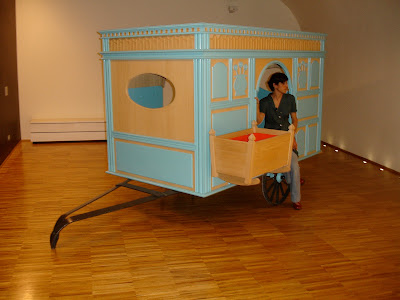 Letizia Cariello in the installation A cena con Timeo 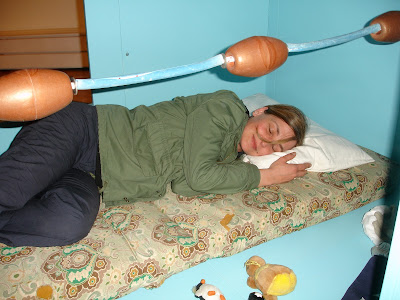 Our Next Exhibitions in Milan

On Monday, April 26th, from 6.30 pm to 9 pm, Art for The World is pleased to present two new exhibitions at Open Care, Milan: A cena con Timeo, an installation by Letizia Cariello and Aral_Citytellers, a film by Francesco Jodice.
During the opening, there will be a conversation between Francesco Jodice, artist, and Saverio Pesapane, architect and researcher.

Our Next Art Events in April and May

Italy, Milan, on April 26 at Open Care: opening of the exhibitions by Francesco Jodice and Letizia Cariello
China, Shanghai, May 1 - October 31 at the Shanghai Expo 2010, French Pavilion: Danser la musique, a Playground by Chen Zhen

OUR FILMS AND VIDEOS ON VIEW
- Greece, Thessaloniki, until April 30: "Stories on Human Rights" at the Archaeological Museum
- The Netherlands, until May 5:  "A Boy, a Wall and a Donkey" by H. Abu-Assad, "What about me?" by E. Keret & S. Geffen, "Impasse" by B. Schouw, "The Final Match" by S. Salour screened on the Freedom Train (collateral event of the Movies That Matter Film Festival)
- Spain, Barcelona, on April 11: "Mobile Men" by A. Weerasethakul at the Centre de Cultura Contemporània de Barcelona (CCCB)
- Turkey, Istanbul, April 3-18: "Stories on Human Rights" at the "Film: a FACE for Human Rights", event organized by the Council of Europe in the context of the Istanbul Film Festival
- Spain, Caceres, April 12-18: "A Boy, a Wall and a Donkey" by H. Abu-Assad, "La Mangue" by I. Ouédraogo and "N'Dimagou" by A. Sissako awarded at the IV Cineposible Film Festival
OUR NEXT FILM PROJECT
THEN AND NOW: Beyond Borders and Differences
A film project aiming to showcase shared beliefs and peaceful coexistence among the world major religions. Initiated by UN's Alliance of Civilizations and under the patronage of the Council of Europe, the long feature will bring together 15 short-movies by renowned filmmakers. A preview with 5 of the first short-movies by Tata Amaral, Fanny Ardant, Masbedo, Idrissa Ouédraogo and Robert Wilson will be screened in Brazil:

- Sao Paulo, on May 24 at CINESESC - Rio de Janeiro, on May 27 for the 3rd Forum of the Alliance of Civilizations at the Museum of Modern Art
No comments:
Newer Posts Older Posts Home
Subscribe to: Posts (Atom)