Since 1952, the Alliance Française has been estabilished in Chennai and has always accompanied the evolutions and changes in this beautiful city, featuring photo exhibitions, songs on the city and short film contests as part of this celebrations held over several days in many venues in the city.

This year the event will feature several exhibitions and shows, including:
- A dance coreography of folk music from Southern France by Francoise Carret on the occasion of the French National Day (14 July)
- The Rock Concert "Raw Power", an exhilarating evening of progressive and heavy metal music, by six of Chennai's best bands: Blind Image, Armour of God, Blood Covenant, Battalions, Carnage and TWKC (18 July)
- A photo exhibition with images of Chennai, by the young photographers Karthick Ramalingam and Siva Chitirai
(3 - 20 August)
- One Billion Eyes: the Indian Documentary Film Festival on Ecology, Earth and Environment
(15 - 19 August)
Among all of these events, the film Stories on Human Rights will be screened at the AFM Auditorium, on Monday 24 to Thursday 27 August, at 6.30 pm. 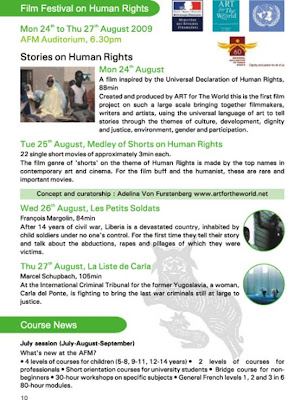 'Lily and Ra' by Armagan Ballantyne

The film will be on view from May 29 to July 31
Instead of a traditional screening of the film, the museum prepared it as a video exhibition.
Large stills from the film, as well as the interviews of the filmmakers and the artists, were hung on the walls, translated into greek.
A plasma TV, showing the film as a loop, and all the greek versions of the books of the writers, were available for the public's consultation.
A video projection room was also settled up, for the film to be shown on a large screen as a loop.
The day of the opening, on May 29, was characterized by the presence of many friends of ART for The World, as well as of Greek video artists and filmmakers.
The Director of the Museum and Curator of the show, Denys Zacharopoulos, has given a dinner on the roof garden of the museum, with a beautiful view of the Acropolis. 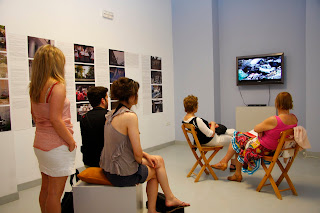 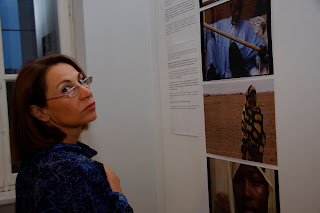 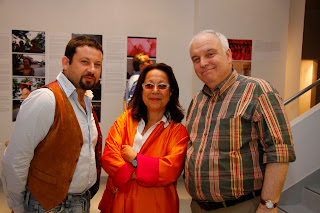 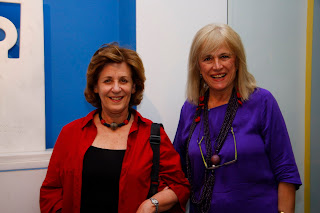 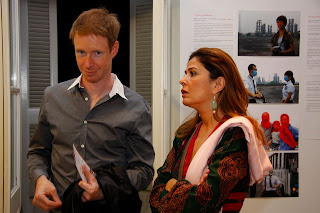 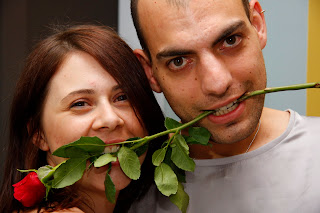 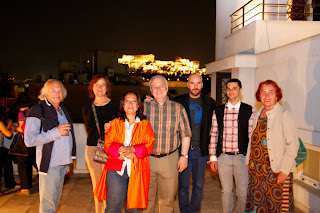 From top to bottom:
1) People watching Stories on Human Rights on the plasma TV.
2) People looking at the stills from the film.
3) The artist Eugenia Apostolou.
4) From the left: the artist Nicos Charalambidis, Adelina von Fürstenberg and Denys Zacharopoulos.
5) From the left: Maria Kyriakides Mylona, daughter of Alex Mylona, the founder of the museum, and Katerina Kamara, member of the board of the Macedonian Museum of Contemporary Art.
6) From the left: Tobias Judmaier and Pavlina Proteau.
7) Two assistants of the museum.
8) Shot from the dinner on the roof garden, with the view of the Acropolis. From left to right:
James Browning, the artist Lydia Dambassina, Adelina von Fürstenberg, Denys Zacharopoulos, the architect Andreas Angelidakis, the artist Angelo Plessas, Phainie Xidis
No comments: Liens vers cet article
Libellés : Stories on Human Rights
Newer Posts Older Posts Home
Subscribe to: Posts (Atom)