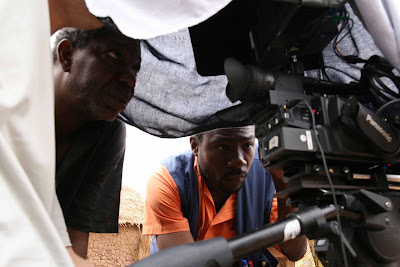 Organized by the Municipality of Milan together with ART for The World, a conference of the filmmaker Idrissa Ouedraogo will take place in Milan at the Palazzo Reale.
12.30 Tuesday March 3rd
Palazzo Reale, Milan
free entrance 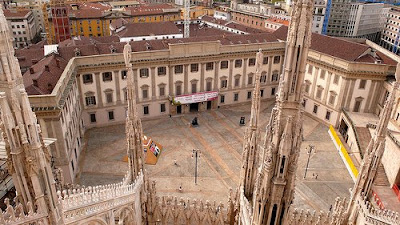 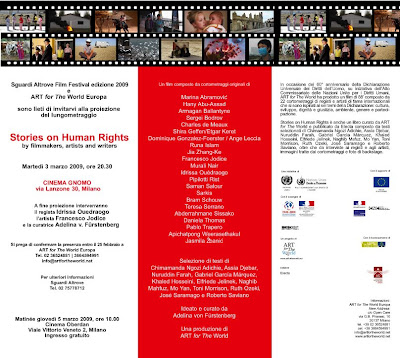 The film Stories on Human Rights will be presented in Milan during the Sguardi Altrove Film Festival with 2 different screenings:
March 3rd, 20.30
Cinema Gnomo
via Lanzone 30/A
with the presence of the filmmaker Idrissa Ouedraogo (Burkina Faso)
March 5th, 10.00
Spazio Oberdan
via Vittorio Veneto 2
No comments:
Libellés : Festivals, Stories on Human Rights

The Crossing by Murali Nair

Stories on Human Rights in Istanbul 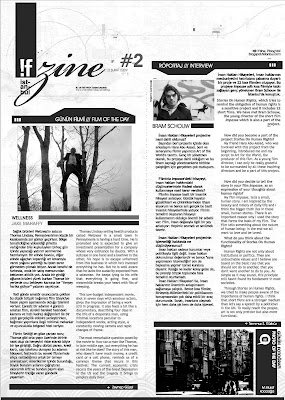 Hereby I send you the interview from the festival newspaper.
The screening was really succesful!
All the best from Istanbul,
Bram
No comments:
Libellés : Festivals, Press, Stories on Human Rights

The Final Match by Saman Salour

Interview with Saman Salour on "The final match" 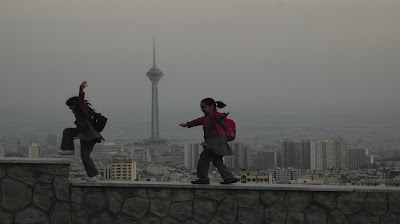 First of all, we would like to ask you where the story that you tell in your movie comes from.
An unwritten rule about the most popular sport in the world attributes it to men. I think whenever football is mentioned, people subconsciously picture some men in the green rectangle. In addition, playing football is considered disagreeable for the girls in many countries of the world. During the shooting of my last film “Lonely Tune of Tehran” where most of the scenes took place on the roofs in Tehran, I saw two teenage girls near our location, who were playing football on the roof eagerly but cautiously and innocently. When they saw our relatively masculine team, they tried to hide their playing from us. The sum total of that notion and this event somehow inspired in me the screenplay for “The Final Match”.
With regard to the topic that was given to you, which aspect struck you the most? Are there ways in which you were already addressing it in your work?

As a functional medium, cinema is – for me – a beautiful, humane, and touching art in establishing a relationship with the audience and its success in impressing them. The themes and stories in which cinema is generally an international and boundless language attract me greatly, and I like and enjoy making them.
Human rights are real, something you can feel on your skin, and not something abstract. In a film, the artist and director – just like the poet – creates a personal universe that is drawn from his or her own life in one way or another. Can you help us understand the link between your short film and the experiences that led you to make it?

The filmmaker is without a doubt influenced by his work consciously or subconsciously. In other words, reality is the filmmaker’s diving board in most of the cases. One day I had gone to Azadi Great Stadium in Tehran to make a documentary. A father wanted to see the match with his little daughter. The police did not let the man enter the stadium because his child was a girl. When the police officers did not let me shoot the scene, I left the camera on the tripod while it was on, and my assistant and I kept ourselves busy some distance away. At night, I was most eager to see the real moments that the camera had recorded by itself. I have never forgotten and will never forget the tears of the little girl, which she wiped off her cheek with the blue flag of her favourite team.
We think that culture in general and cinema in particular can help people to better understand the importance of human rights in their own lives. What do you want to provoke in the wider public with your film?

If by rebuilding the realities and emotions, the film – even in its short time – can establish a relationship with the audience and show them a better way of life, then I have done my job as a filmmaker.
In most of the films created for this project, we see signs of clashes deriving from cultural diversity or caused by limitations imposed on individuals that curtail their freedom in different ways. What do you think is the reason for that?

Diversity in cultures is a suitable background for the formation of a story, and I believe that classically speaking, no drama can take shape without diversity. All in all, depicting limitation and discrimination in various societies is a global, general, and certainly, a humane and attractive theme.
This project involves artists and directors, people who usually work with very different languages. What do you think are the differences between artists and directors in their approach to the creative process?

Production of such films whose unique feature is choosing directors and their stories from various small and big countries from all over the world with different nationalities, religion, traditions, and cultures may – at first glance – give rise to basic differences, but the focus of the film on the seven basic human rights subjects, and its proper screening and criticising will without a doubt take good steps in the eradication of sex and racial discrimination, and the promotion of a global humane culture. And in the end, the art of cinema – as an efficient means for the making of a better world – will be admired by the people of the world.
No comments:
Libellés : Interviews, Stories on Human Rights

Stories on Human Rights in Istanbul 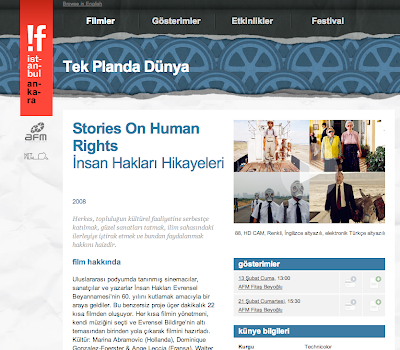