Special Screenings of Stories on Human Rights in January and February 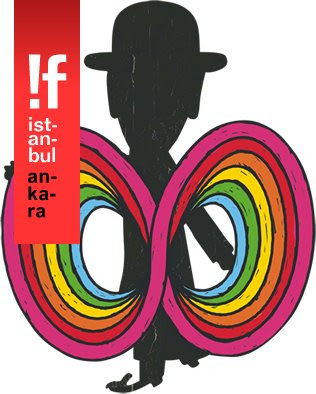 28.1/1.3.09 World Economic Forum, Davos, Switzerland, A selection of Stories on Human Rights, such as the shortmovies of Hany Abu-Assad, Saman Salour, Francesco Jodice, etc, screened individually before each section. 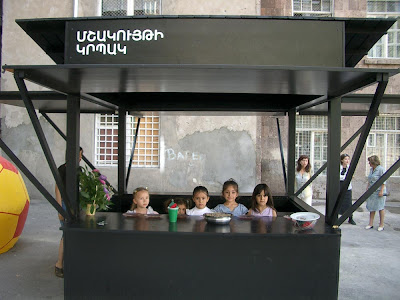 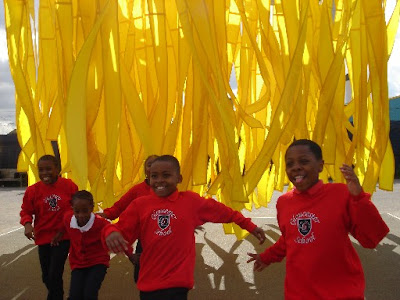 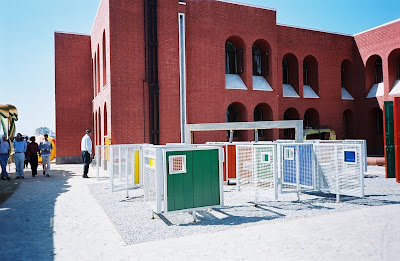 Playgrounds and Toys is a project started in 2000 and developed by ART for The World untill 2006. Now AFTW intends to get back to it and give it further attention.
In the pictures:
1) Fabiana de Barros, Fiteiro Cultural, John Kirakossian School in Yerevan, Armenia, 2003
2) Shirazeh Houshiary and Pip Horne, Playground, Gloucester Primary School, Daniel Gardens, Peckham, London, 2004
3) Martand Khosla, Playground, Deepalaya School, Gusbethi, Haryana, India, 2004
No comments:
Libellés : Playgrounds and Toys

Time is the child's kingdom 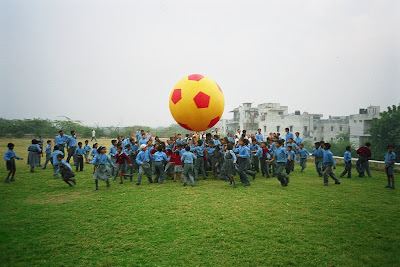 Started in 2000 Playgrounds&Toys  is a fully sustenaible and  innovative contemporary art project that offers tangible support to existing schools, orphanages and local communities in order to improve the wellfare and upbringing of disadvantaged children and those with little or no access to such facilities, throughout the world. Art for The World provides these schools and communities with both indoor and outdoor playgrounds, that promotes the education of the children and assists in their personal rehabilitation, keeping them stimulated, encouraging the development of cultural and personal identity, and, most important, adding joy to their lives.
With great sensibility and in accordance to the project’s guidelines, over fifty contemporary artists, architects and designers – young or well know – have collaborated with Art for The World to create unique designs for playgrounds and educational toys for children, that are simple and inexpensive to construct and that strictly abide by standard safety requirements. These playground designs, in the form of 1:15 scale models, have also been shown in a travelling exhibitions around  the world, in order to increase awareness to the largest international public possible.
Playgrounds has been developed in schools and communities, so far, in India, United  Kingdom, Armenia and Greece as well as collective toys have been distributed in the refugee camps in Afghanistan, Cambodia, Nigeria, Pakistan, Sierra Leone and Tanzania with the help of UN Agencies.
In the picture: Edgard Soares, Goooooaaal!!!!, Deepalaya School , Kalkaji, New Delhi, India, 2002.
No comments:
Libellés : Playgrounds and Toys 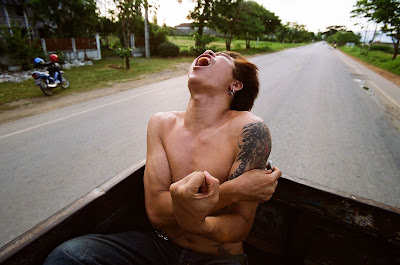 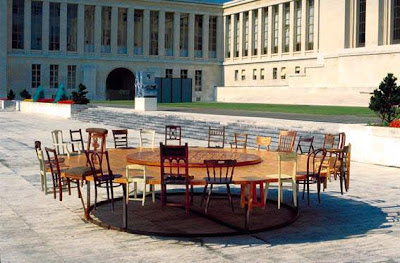 In the picture: Chen Zhen, Round Table, UN/ONU, Geneva
No comments:
Libellés : Exhibitions

Interview with Pablo Trapero on "Sobras" 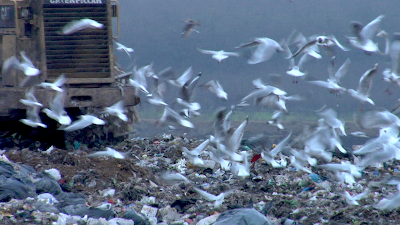 First of all, we would like to ask you where the story that you tell in your movie comes from.
I'm always surprised with the frequently and naturalness with which food is thrown away. Individuals, families, shops, companies, factories, producers, all throw away food. It is strange that we all easily accept the apparently reasonable grounds for convert food into trash.
With regard to the topic that was given to you, which aspect struck you the most? Are there ways in which you were already addressing it in your work?
Hunger is something simple, visceral, direct and clear. However, most of the time this scourge is dealt with modesty. Also solemnly. With fear and distance. It is the engine of political campaigns, humanitarian groups, business groups, social movements, films, peridodisctic and political essays. But none of these approach us to a direct solution to this urgent problem.
On the contrary, everything seems to continue to encourage the same inequality machine.
Human rights are real, something you can feel on your skin, and not something abstract. In a film, the artist and director – just like the poet – creates a personal universe that is drawn from his or her own life in one way or another. Can you help us understand the link between your short film and the experiences that led you to make it?
I never understood the real reasons leading to a supermarket, restaurant, factory or airline to throw food.
Harvests not sold on time are thrown away. Food is discarded before its expire date while others are destroyed due to packaging defects or due to the arrival of a new product. Food that became cold in its tray is thrown away in restaurants, planes, buses or homes.
Why all this waste when with only minimal action these foods could be relocated or redistributed? Why so much denial?
All these questions and their implausible answers pushed me to pick this topic for my segment Sobras.
We think that culture in general and cinema in particular can help people to better understand the importance of human rights in their own lives. What do you want to provoke in the wider public with your film?
I hope that this little story will bring closer this hidden reality and that it becomes a starting point for debate. And I strongly desire the parties capable of articulating a change feel the urge to do so.
This project involves artists and directors, people who usually work with very different languages. What do you think are the differences between artists and directors in their approach to the creative process?
I believe in diversity.
Film is a celebration of differences.
Therefore, I think that creative processes should be different to reach greater expressiveness.
Now let’s talk a bit about you. Who is Pablo Trapero?
He’s someone fascinated by the moving images, by sound and colours, by films that have moved and still move him, and by the need to tell stories.
I also think that cinema is a powerful and touching tool that can help us come up with ideas for this world, in a time not so far ahead, to be better. And for all this, he is someone who deeply loves film.
No comments:
Libellés : Interviews, Stories on Human Rights

Interview with Abderrahmane Sissako on "Dignity" 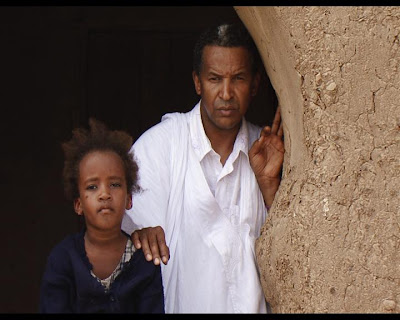 First of all, we would like to ask you where the story that you tell in your movie comes from.
The idea was born from the complexity of the theme proposed: dignity. I think it’s very difficult to deal with such sweeping concepts as justice and dignity in the allotted two or three minutes, so I looked for an idea that actually asked the question ‘What is dignity’ rather than answering it.
With regard to the topic that was given to you, which aspect struck you the most? Are there ways in which you were already addressing it in your work?

I think the most stimulating aspect of the theme is that dignity should be a worldwide question. Anyone can speak about it, no matter where they come from. I’m an artist and part of my identity includes being universal. As a film-maker I’ve always wanted to tell the story of people who have really difficult lives and deep down resent injustice, but still manage to keep going, to keep living, perhaps that’s dignity.

Human rights are real, something you can feel on your skin, and not something abstract. In a film, the artist and director— just like the poet—creates a personal universe that is drawn from his or her own life in one way or another. Can you help us understand the link between your short film and the experiences that led you to make it?

My origins and my life give me strong links to Africa. Injustice and suffering under many guises are endemic in Africa today and this drives me. I’ve always wanted there to be monuments to ‘worthy anonymous people’ in the world, along the same lines as the tombs to the unknown soldier, because I find them more interesting than the people whose names we know.

This is why I film people passing by, people I may never see again....  but who leave their mark on me and on others, immortalized on film.
We think that culture in general and cinema in particular can help people to better understand the importance of human rights in their own lives. What do you want to provoke in the wider public with your film?

"Like water that nourishes the land to feed men", someone said, "culture nourishes their souls to reconcile them".

With this film I wanted to make the statement that there can only be peace in the world, that words like ‘rights’ and ‘hope’ can only have meaning, if the world’s wealth is more evenly distributed.
In most of the films created for this project, we see signs of clashes deriving from cultural diversity or caused by limitations imposed on individuals that curtail their freedom in different ways. What do you think is the reason for that?

This is certainly due to the failure to solve the important issues we face every day around the world. Our role as spokespeople obliges us to take a stand.

Now let’s talk a bit about you. Who is Abderrahmane Sissako?

I was born in Kiffa, in Mauritania. I studied film-making in the Soviet Union and now I live in France. I’ve lived in Africa and I think I’m a citizen of the world.